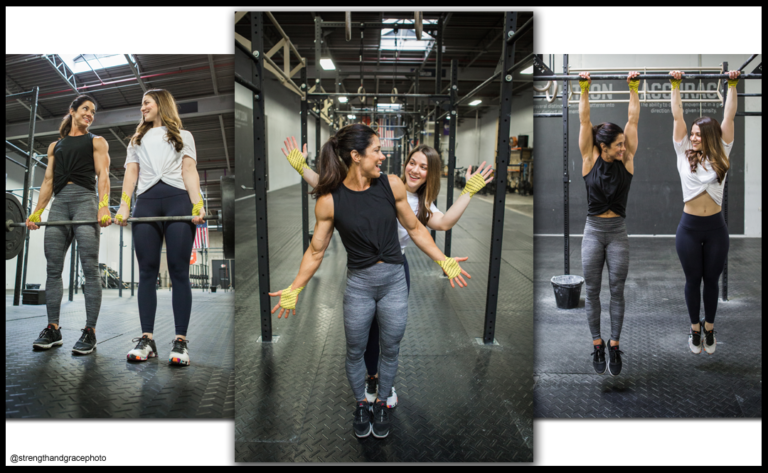 Shellie Edington is a one-of-a-kind athlete. It quickly becomes evident, through her glowing personality, that she is a genuine, determined, and giving person. Having met many athletes and vendors, we have noticed one common thread: whenever Shellie’s name arises in conversation, we only hear glowing praise.

Becoming a Masters Division champion of the CrossFit Games was not always a goal that Shellie was actively working toward. As a former competitive gymnast, Shellie slowly moved away from her athletic lifestyle. She married her husband Christopher, and soon after, she became a mother of 3 beautiful children. Focusing on her life as a wife and mother, Shellie’s strength and mobility began to wane while she gained some weight.

Shellie noticed that there was no structure for kids younger than first grade. Using her gymnastics background, Shellie made the decision to introduce her children to sports and athleticism and developed Tumblin4Kids. Her introduction to CrossFit happened in 2010 when one of her students mentioned a CrossFit Kids course at CrossFit 614 in Columbus, Ohio, instructed by the owner, Mitch Potterf. This ignited her journey to CrossFit stardom.

At the beginning, Shellie found herself frustrated, out of shape, and in pain. Unable to do a single pull-up and experiencing pain in her joints, she pushed past her discomfort. With hard work and dedication on her part and with the guidance of her coach, Mitch, Shellie found herself standing on top of the podium in Carson four years later.

Shellie currently holds a high ranking on the top of the leaderboard in her division and continues to train with Mitch at CrossFit 614. Her aspirations to become the best version of herself shine through her CrossFit training and performance.

Please join us in wishing Shellie the best of luck during her training for and performance in the 2017 CrossFit Games in Madison, Wisconsin.