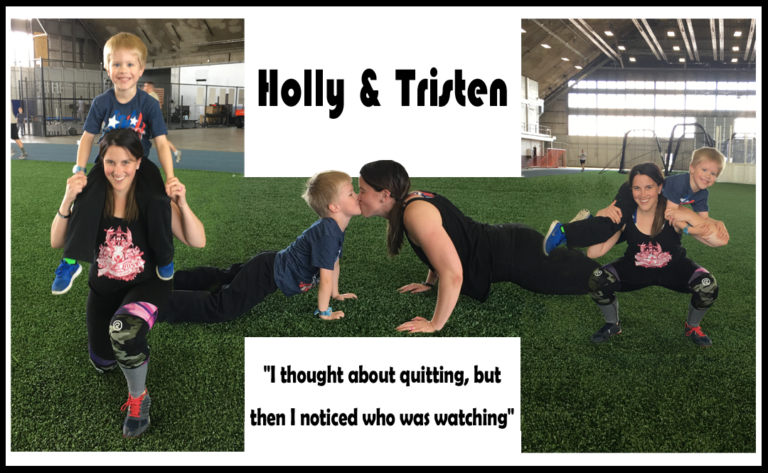 THANK YOU FOR YOUR SERVICE!

One of the most resounding aspects of CrossFit is its celebration of the men and women in the armed forces. When many of the servicemen and servicewomen are called away, their families send them off with pride in their hearts, pushing forward in their absence—and Holly Allen is no exception.

Holly is no stranger to keeping a very active and full life. In addition to being a mother of two boys, a CrossFit competitor, a college student, and a small business owner, she is the wife of an active Air Force serviceman. Holly is no stranger to a full schedule, as she has mastered the art of managing her time to accomplish her goals while her husband is away. If there is one thing that she has learned to do, it is to keep pushing forward.

As a kid, Holly was an active gymnast for many years. As she grew older, this transitioned into other sports, with cheerleading as one of her highlights. Looking for her next challenge, Holly had always heard about CrossFit, but was intimidated by the stories she had heard.

During her pregnancy with her last son, Holly was ready to get serious about her fitness. Having always struggled with her weight, she made a commitment to herself to begin a healthy lifestyle and started weightlifting. Soon after, with the help of a close friend to guide her, Holly dove into the CrossFit world in March 2016.

Like most beginners in the CrossFit world, Holly worked toward building a comfort level with the Olympic lifts. By December 2016, she was embracing them. She quickly became enamored with the variety and brutality of the challenges of CrossFit—which, as she proudly admits, is what keeps her coming back for more. The mental and physical aspects of each WOD have helped her reach and surpass her goals.

Holly’s CrossFit setup is a bit different from a typical box. She currently resides in South Dakota on the Ellsworth Air Force base and performs her WODs in an airplane hangar with fellow CrossFitters on the base. Although she does not have a coach on-site, Holly has a coach who is local to the area who will come to the base where they will work together on her form and other skills as needed.

With no shortage of goals, Holly is focused on improving herself on multiple levels. With regard to her fitness goals, she is working to become a better, stronger, and faster athlete, where she strives to move toward the front of the pack in future competitions. Holly is actively working to achieve her goals of a 200 lb. back squat and a 300 lb. deadlift by the end of 2017. In addition, Holly is aiming to achieve her weight loss goal while continuing to become stronger and faster. Outside of CrossFit, Holly hopes to complete her bachelor’s degree and move into the next stage of her career.

Holly’s drive comes from her family. Her husband and their two sons, Tristen and Dawson, are the cornerstones of every achievement. With her husband pushing her to the next level, he is the foundation for her motivation and success. Most importantly, Holly wants to set a solid example for her two sons, where they will look back and remember her as strong, brave, and confident.

“I want them to remember that their mom kicks butt.”